A recent arrival at KAB Gallery Terrigal – ‘Lost’ by Penelope Oates – is a captivating and evocative work. There is, however, more to explore than first meets the eye, the work holding a great deal of historical allusion. The mixed media on board piece subtly references the iconic work of Australian Impressionist Frederick McCubbin. Looking closely at Penelope Oates mixed media work, the links to his two ‘Lost’ paintings are realised in the most beautiful ways.

McCubbin painted two most notable “lost” subjects commenting on the mysterious nature of the Australian landscape. The Australian bushland is so uniquely dense making it all the more dangerous, as people could quite easily become lost and the environmental conditions are extremely harsh. The first of his two paintings was rendered in 1886 and the second in 1907. Both pieces feature a single child figure lost within the bush landscape, posing as a quintessential symbol of vulnerability and anxiety as they are enveloped by their surroundings.

The portrayal of the Australian natural landscape as an overwhelming force is not uncommon. I am reminded by these works of the famous tale of ‘Picnic at Hanging Rock,’ published in 1967 by Joan Lindsay. In summary, this is a story set in the early 1900s in which a group of schoolgirls mysteriously disappear whilst on a bush picnic.  The story was set in the same period as McCubbin produced his work. More than anything, the dichotomy of the Australian landscape is an undeniable facet explored in all of these works, either through the medium of paint or within the literature. The sublime beauty and endless fearful monotony is particularly present within the layers of McCubbin’s work, and this was a source of inspiration for Penelope Oates. 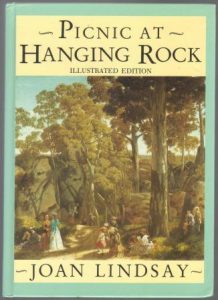 Delving deeper into the original ‘Lost’ series by McCubbin, the overarching anxiety of the figures in both paintings is clear. They are rendered slightly off-centre within the composition, hunched in exhaustion and shrouded by the earthy tones of their surroundings. Through multiple technical qualities the work explores the artist’s deep connection to the Australian landscape along with his reverence to the powerful spirit of the bush.  The tonal blocking-out that McCubbin utilised within the early stages of the painting process creates a burnt, sienna-coloured definition of space. This earthy pigment is then juxtaposed with a blue-toned haze which lingers within the composition to create a sense of uneasiness. This blue hue is a quality that can be seen within Penelope Oates version as well. Both utilise this method in order to create a sense of unattainable depth within their work but also bring touches of light to the overall plane, juxtaposing the harsh, dryness and rigidity of the thick foliage. It is the lining of hope within the dreariness of the deadly rural landscape.

Another commonality of both artists is their layered working process. In the case of McCubbin, this can be referred to as ‘Pentimenti,’ in which there is evidence of an underpainting that has been reworked. For Oates this is her usual style, her work almost always involving more than one medium and method. Both are heavily focused on surface and are methodical in their processes, often building up the medium and rubbing it back where necessary. Both also have sourced a way to use unorthodox application in order to create texture. Oates carves into the board upon which she works, then applying ink to the timber to reach the desired evocation of aspects of the hypothetical landscape. McCubbin, on the other hand, constructed a series of ‘sketches’ in the drafting stages, where he would experiment with paint application to create a refined methodology for himself to enhance his painting’s textural effect.

When comparing the paintings, be it the Australian Impressionist approach of McCubbin or contemporary explorations of Penelope Oates, one can see how the running thread is their echoing of moods, feelings and emotions tied to the landscape rather than directly representing a particular geographical location of Australian bushland. The figure in Penelope Oates’ latest work is not just lost within the trees, but also lost within her thoughts and psyche. The audiences’ eye is drawn to the framed plane within the plane, a painting within a painting, in which the woman is confined. The work is dreamlike, surreal and almost romantic. It is, overall, a must-see piece and is ready to hang in your space with much to explore within the black shadow frame. Visit our Terrigal Gallery location or our website to purchase this unique work.