Upon entering KAB Gallery Pymble, there are many beautiful pieces of art that catch one’s eye. However there is one work in particular that has just been delivered that is quickly becoming a topic of conversation amongst visitors of our Sydney space. The work is called “This is a Job for International Rescue,” and it was skillfully rendered by KAB Gallery artist, Andy Collis, a prolific painter and art academic. 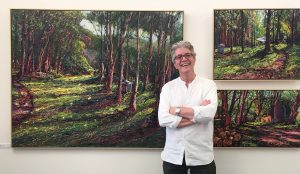 Roughly 65x185cm, the piece is expansive, not only in length but with extraordinary detail. Elements of the work appear in the 3rd dimension, with other elements receding into the background. Andy has expertly designed the quadriptych, with each of the four panels consisting of their own elements, while they all work in cohesion to create the wider painting. The work, as whole, can be taken as a piece of pop-culture, 1960s nostalgia, with a great deal of allusion to the Thunderbirds television program, one of Andy’s favourites growing up. However, the painting does have its deeper conceptual nuances. Andy is a receptive artist, and within this work one can undoubtedly find some underlying references to the current 2020 global climate.

Many remember the cult 1960’s program titled “The Thunderbirds” as a futuristic impression of the 21st century.  For its loyal viewers at that time it seemed like a heavy projection of a future that was a long way away. The world disasters the characters faced were literally just science fiction. Fast forward to the present and it is almost as if our circumstances had been predicted to some extent by those imaginative script writers.

While the Thunderbird aircrafts immediately rouse attention within the painting its the details and hidden references I find most captivating. For example, the organization referenced in the title, the ‘International Rescue,’ while once fictional, is now an existing committee who support refugees and due to the internet, we have almost instant access to news of all of the pandemics and catastrophes world-wide. We are media saturated with news and information which for me, draws a similarity to the way Andy has saturated this painting with details. The layers and angles offer the viewer so much to explore.  Take a look to view the detailed plane, speech bubbles, iconic comic book tropes and various imagery presented across the 4 panels. 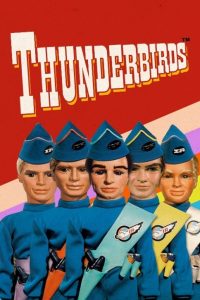 There are numerous references to point out including the words of David Bowie’s song from 1971, called “Oh you pretty things.” It reads “all the nightmares came today and it looks as if they’re here to stay.” This is, of course, a reference to the terrible year and global crisis we have faced in 2020. Thus, the first panel is a call for help. Panel 2 references the issue of global terrorism. The aircrafts within the panel are under attack. On the converse to the TV program and its many known enemies, however, The Hood (referenced in the bottom right speech bubble) much like the enemies of today… is ambiguous and unknown. Panel 3 refers to the issues of space exploration coupled with the problem of space pollution. The character, Brian, states “these disasters aren’t natural, but man made,” alluding to the way in which humans have contributed not only to climate change here on earth, but contamination up above. Panel 4 shows Geoff Tracy, the father and head of the organization, wearing a mask and telling his boys, the Thunderbird pilots, to keep their distance. This is our current reality and something to which we can all relate. The underwater Thunderbird 4 is also beneath the Sperry Glacier, which is the fastest melting glacier in the world, due to global warming. Meanwhile, in the space station, John tells Gordon in Thunderbird 4 that “zooxanthellae is under attack,” referring to the organism that gives the coral reef if saturation, colour and vibrancy, a subtle nod to the way in which coral bleaching is but another consequence of our activity. 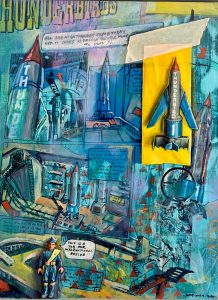 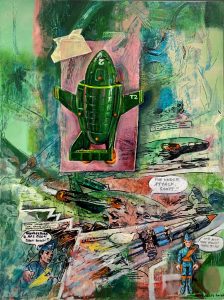 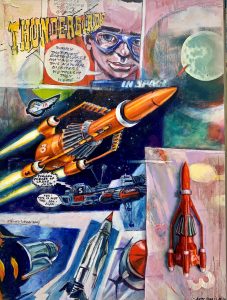 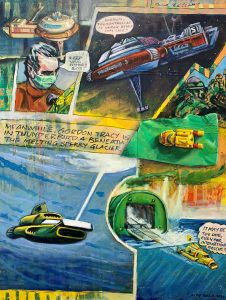 Andy Collis does not intend for the work to be overt or preachy, or reference a strict binary of what to do and not to do. Rather, the piece serves as a nostalgic tribute to the look and feel of the Thunderbirds, a vehicle in this case for commentary on the happenings of the 21st Century. Not only is it an interesting lens through which to view the world, but an extraordinary piece that brings life into any room in which it is hung. ‘This is Job for International Rescue’ is framed in a beautiful white shadow frame and is ready to hang in your space.

The KAB Gallery team will be taking a few days off to recharge over the Easter break. We hope to see or speak to you on Easter Saturday. KAB Gallery Terrigal staff will also be available by appointment for artwork pickups or purchases on Easter Monday.

We hope you have a safe holiday with family and friends!