It was with a heavy heart that the KAB Gallery team learnt this morning of the untimely passing of one of our favourite artists, Patrick Carroll. Patrick passed away over the weekend, the victim of a tragic accident which has left the entire Central Coast community reeling. 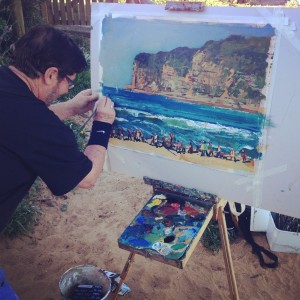 Born in Bathurst in 1949, Patrick worked as a highly successful professional artist for 45 years. He spent many years living and working around the northern suburbs of Sydney, during which time he painted several of his iconic Kirribilli and Lavender Bay scenes. After several years of living between Sydney and the Central Coast he made the permanent move to live on the Central Coast around 10 years ago, basing himself near his long-time artist’s studio at The Entrance.

Ask anyone to list the traits of an artistic genius and they will usually describe Patrick Carroll’s personally perfectly. He was a tall man with a deep booming voice and big personality; a fun commanding presence who was always self-deprecating and looking for ways to shock, but with a mind that was constantly observing. He was always looking for the next scene to paint; the next character to create; the next “found object” he could craft into a wonderfully kooky sculpture; the next medium to explore; a new way to stamp his personality onto his work. A tiny example of this personality was his phone’s voicemail greeting, consisting of a 30 second greeting from his South American “man servant”, explaining Patrick’s absence and promising to pass on your message. Of course it was only Patrick as a funny character, but the way he kept the joke alive during future discussions with him only added to the zaniness. And of course who can forget that in his spare time he was also a very good Elvis impersonator! 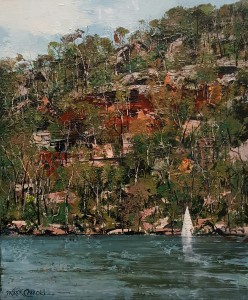 Patrick was amongst one of the first artists we worked with when KAB Gallery launched in 2013. His name and work were incredibly familiar to Director and Curator Kerry Blanket from her previous positions in investment galleries throughout Sydney. And we were very keen to have an artist of his calibre on board and excited to represent his work. One chilly night he invited us to visit his studio to select the most appropriate pieces for exhibiting in our gallery, giving us the full tour of his studio and introducing us to many of his works and sculptural pieces. He then invited us into his home around the corner to view more works which were stored there, giving us the pick of whatever we wanted to exhibit – even from amongst the many artworks decorating the common areas of his unit block! The night we spent with the artistic genius is certainly a meeting that we will never forget!

Throughout his career Patrick won many top art prizes and was hung as a finalist in many more. He travelled extensively to find inspiration for his artworks, and took up several residences in Venice and other artistic areas of the world. He received well over 100 awards and commendations throughout his career, hosted more than 40 solo exhibitions and exhibited in countless group shows, and not to mention appears in many important and household collections around the world. Not many Australian artists achieve the level of professional success and fulfilment Patrick enjoyed and worked hard to achieve. For this alone his place in the Australian art history books is well earnt. When combined with his artistic genius, he truly was one Australia’s best and most loved artists.

Josh is a keen art collector himself and has a particular interest in contemporary and abstract art. His vision for KAB Gallery is to open the physical gallery space to the online dimension for the 21st century art buyer.

Josh combines his art market experience and knowledge of the contemporary art market to make KAB Gallery available to all audiences via the digital medium.