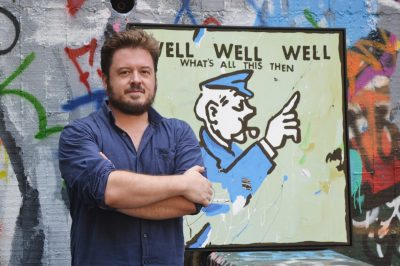 Contemporary Australian artist known for his bold post-modern appropriations. A self-proclaimed pop artist working within a contemporary art market, his work is sought after and collected world-wide.

An avid booklover, Benjamin worked in a bookstore where he was exposed to the classic orange Penguin cover on a daily basis. Fascinated by the power he saw in these titles to attract interest, he began appropriating the icon cover on canvas. This extended and lead to a series of appropriations following the nostalgic narrative of the Monopoly board game. Some of his works have also featured tarot cards, Uno playing cards, record labels and even Mexican Loteria cards. The paintings are a warped representation of familiar imagery, composed with a multi layered painting technique. Benjamin describes his artmaking process as a build up of textures, colours, contrasts and various media. Energetic and fun, they hark back to memories that audiences have when playing the games.

Working in both acrylics and oils – on canvas and on board – Benjamin is inspired by Rick Amor, Mark Tansey, Nicholas Harding, Robert Hannaford, Paco Pomet and many others. His work has been exhibited in at the Art Gallery of NSW as a 2012 Finalist in the Sulman Prize as well as various regional galleries including Gosford Gallery and the Norman Lindsay Gallery. Read more about Benjamin’s career highlights Here

Edmund Capon, former Director of the Art Gallery of NSW, said of Benjamin’s Unpopular Penguin series: “An evocative imagining of the familiar Penguin Paperback… it was a painting we all liked very much for its rich texture, its sense of memory and it’s sort of nostalgic humour”

Can't find what you are looking for? It may have recently sold. View sold items.