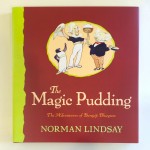 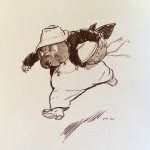 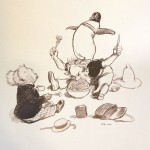 Sorry, this has recently sold

The Magic Pudding: The Adventures of Bunyip Bluegum, written and illustrated by Norman Lindsay in 1918. A best seller, this book has never been out of print production since its original publication by Angus & Robertson in the year 1918.

“The Magic Pudding” was first cooked in 1918, and thousands of children (and their parents) have been relishing it ever since. Norman Lindsay’s timeless classic follows the adventures of debonair young koala Bunip Bluegum, sailor Bill Barnacle and penguin Sam Sawnoff – owners of the much-desired Magic Puddin’ Albert – who try to out-wit Possum and Wombat, the professional, and extroadinarily persistent, puddin’ -thieves.

This beautiful hardback edition includes all the original illustrations and, for those who have not yet tasted this puddin’s magic delights, its definitely worth savouring.

Norman Lindsay broke away from the traditional European tradition in children’s literature of the time, capturing the imaginations of children with characters that were uniquely Australian. His drawings of native bears and other Australian animals coincided with an increasing interest and pride in our own fauna. It was, however, Lindsay’s belief that children preferred to read about food than fairies that ultimately gave rise to his book.