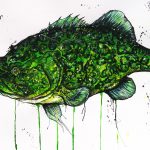 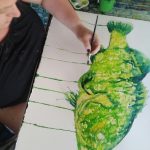 View on your wall

Try this painting on your wall free anywhere in the world Want to view your favourite KAB Gallery painting on your wall? With our Virtual Reality viewer you can.

Using your handheld device, position the artwork, view it from different angles in the room, reposition it to take advantage of the light. It's all to scale and it's all free.

Visit this artwork page in the web browser of your smartphone or tablet to get started
Or send yourself a link via text message:

View on your wall now

Convert to your currency
Please note, when purchasing you will be charged in Australian Dollars. This currency conversion is an estimate only - your credit card provider may charge you an additional currency conversion fee and/or use a different exchange rate.
or 4 payments of $487.50 with

Certificate of Authenticity is included with this purchase.

Framed in a contemporary black frame under glass and ready to hang. Framed Size: (77x95cm)

“The eastern cod has been listed as ‘endangered’ under both the (Commonwealth) Environment Protection and Biodiversity Conservation Act 1999 and the (NSW) Fisheries Management Act 1994.

Eastern cod are a large, predatory, freshwater fish native to only the Clarence and Richmond Rivers in northern New South Wales, where they were once abundant. Although similar to the Murray cod, they are a separate species. Populations of eastern cod apparently collapsed in the 1920s and 1930s and continued to decline until the 1980s, when the species was protected. Wild eastern cod are now thought to be found only in the Mann and Nymboida river systems, tributaries of the Clarence River. Small scale surveys and anecdotal information suggests that eastern cod numbers are being maintained, and may be recovering, but there has been no rigorous scientific assessment of their abundance.”

Part of the Collection:

The KAB Gallery team will be taking a few days off to recharge over the Easter break. We hope to see or speak to you on Easter Saturday. KAB Gallery Terrigal staff will also be available by appointment for artwork pickups or purchases on Easter Monday.

We hope you have a safe holiday with family and friends!